On Monday May 6th Greg Adler had a live hair transplant surgery performed by Dr. Sara Wasserbauer and broadcast on TheBaldTruth.com. The following is Greg’s journal as he heals and describes his experience as his new hair grows in.

First and foremost, I wasn’t the slightest bit nervous or apprehensive about the procedure in the days leading up to it.  In fact, I was excited.  I had an FUT procedure with Dr. Sara almost exactly five years ago, and it was a cakewalk.  Dr. Sara and her staff are thorough, professional, and friendly, which is why I chose to have her do my surgery both times.  I actually flew all the way out from Texas this time!

I wanted to do another surgery because my hairline continued to recede over the past few years and other areas were getting thinner.  Growing up, I did all the stuff that kids do – jumping off of things, riding bikes, playing football without a helmet, climbing trees, etc.  As a result, I ended up with quite a few nicks, scars, and other blemishes all over my scalp.  I also have a lot of moles, many of which are on my scalp.  In high school, I decided to shave my head.  I was somewhat surprised to see that I had just about the ugliest noggin I’d ever seen.  Also in high school I competed in track and field and cross country, meaning I was outside in the sun for six or seven hours a day, almost year-round, with no hair to protect my scalp, and I didn’t wear sunscreen or a hat.  In the late 90s I grew my hair back out and never really thought again about all the damage I’d done to my scalp. That all changed in 2007 when a friend of mine died from melanoma that spread to his brain, lungs, and bones.  He left behind a wife and two year old daughter.  It originated at a mole on his scalp.  From that point on, I was diligent about having my moles checked every five or six months to make sure none of the moles on my scalp became cancerous.  Given my history of extreme sun exposure, my dermatologist took an aggressive treatment approach and removed between eight and ten moles on my scalp, just to play it safe.  So at that point I not only had a scalp that was covered in moles and childhood scars, but several additional pits, divots, and pinkish-red scars from having many of the moles removed.  If my hair remained dense, no one would know.  But as my hair continued to thin, all those blemishes on my scalp became increasingly visible.  So my decision to have hair transplant surgery was certainly aesthetic, but for two reasons: (1) I think a fuller head of hair looks better, and (2) it served the double purpose of covering up my ugly scalp.

The day of the surgery couldn’t have gone better.  Dr. Sara and I sat down together ahead of time and we discussed my goal, which was to maximize the amount of density in the areas that had become thin.  This is why I chose FUT over FUE; FUT yields more follicles.  Dr. Sara used a special surgical marker to draw on my scalp where my new hairline would be.  We also took “before” photos that will be compared to a set of “after” photos several months from now so everyone can see how well the procedure worked.

Once the surgery began, there was no pain or discomfort and I got to watch movies the entire time, except at the beginning when I was talking live with Dr. Sara and Spencer via webcam on TheBaldTruth.com.  Spencer was an excellent host and had a good series of questions.

The staff was awesome.  They were all really nice, very accommodating, and were very patient.  If I needed a bathroom break or a minute to get up and stretch, it was no problem at all.

After the surgery I went out for pizza and ice cream, took a little nap, and watched movies for the rest of the night.  The first night, I set up my bed with a bunch of pillows so I could sleep upright and minimize any swelling.  Remember, when your scalp is being injected in several areas with anesthetic and then a couple thousand hair follicles are being transplanted there, it’s going to cause some trauma, which causes swelling.  There was no pain or discomfort (I didn’t take Vicodin or any other prescription pain killers, just some Tylenol) and I was able to eat normally.

The next morning (Day 1 Post-Op) I went back to the office to have my hair washed and my head checked, just to make sure everything was okay.  And it was… everything was fine.  I was instructed to “baby” the grafts for the first 72 hours and gently wash my hair three times a day.  You get a cup of warm water and pour it gently over your head in the shower.  You then lather up some shampoo in your hands and then gently “pat” (don’t rub) the areas where the new hairs have been transplanted.  This keeps the area clean and optimized for growth.  You then use another cup or two of warm water to rinse off the shampoo.

I’ve never experienced even the slightest discomfort in the areas where the new hairs were transplanted.  However, on Tuesday night (Day 2 Post-Op) I did experience some minor itching/soreness on the back of my head at the donor area because you do get some swelling there too.  The Tylenol didn’t seem to be working for me (it generally doesn’t) so I called Dr. Sara and she told me to switch to ibuprofen.  I took 800mg of ibuprofen and haven’t had any pain or discomfort since.  Even right now I can touch the donor area with my hand – I can even lay my head down on it – and there isn’t any pain whatsoever.  At its worst, the pain was never more than a 3 on a scale of 10 anyway – more of an annoying soreness than actual pain.

There were some slight differences with this procedure as compared to the one I had in 2008.  In 2008, my head was sore at the donor area for several days.  This time, it was sore for about one day until I took the ibuprofen and the swelling went down.  In 2008, I had 1,300 grafts done.  This time, I had 2,400 which, of course, means more trauma to the front of your head where the grafts were transplanted.  So the only downside this time is that I do have a bit more swelling, but it was probably my own fault.  I started out sleeping at 45 degrees last night, but woke up sleeping on my stomach with all the pillows on top of me.  I woke up and thought, “How the heck did that happen?”  In any event, in 2008 the swelling went away in about 48 hours, so I’m sure the swelling this time will be gone by the end of the weekend.

Friends and family keep calling and texting me, “How do you feel? Is your head okay?”  Honestly, I feel totally fine.  No pain; no discomfort; I’m sleeping just fine; just some swelling around my eyes and forehead, and that’s it.  I saw an old friend on Tuesday (Day 1 Post-Op) and he couldn’t even tell I’d had the procedure done.  He said, “If you hadn’t told me you did that, I never would’ve known.”  You can’t even see the sutures in the back because my hair covers them up, and, for the most part, the hair on the front of my head is covering the scabs, so you can’t even see the scabs or any redness unless you move the hair upward to reveal the scabs. My existing hair covers the transplants so no one could tell even on day one that anything was done.

Today is Sunday, May 12, six days after my surgery.  I’ve resumed most of my normal daily activities except exercising.  Last time I had it done I went back to the gym too early (should’ve listened to Dr. Sara) and I think it probably made a bigger scar.  This time, I’m going to follow her advice precisely, i.e., wait until a full week after my sutures are removed before doing anything other than very light, short-duration cardio. The only discomfort I’m experiencing is very minor and only when I look downward and feel a small “tug” in the donor area in the back.  The skin back there is still taut from having the strip removed and the edges stitched back together, but I can tell it’s gradually stretching out because the skin feels looser as time goes on.  As you can see from these photos, you can’t even see the scar or sutures at all.  I edited one photo to show the approximate location of the incision line (just below the green dotted line).  Can you see any sutures or an incision?  I can’t!

As far as swelling, I’m still sleeping normally and the swelling continues to go away.  I’m sure it would have gone away already had I not kept sleeping on my stomach!  As you can see in the edited photos I took this morning, there’s still a slight amount of puffiness by my eyes and on the bridge of my nose, but for being only six days out from surgery, I’m quite pleased with how quickly the swelling has gone down.  Also note in the photos that there isn’t any redness or other signs of trauma around my hairline. A slight amount of puffiness by my eyes and on the bridge of my nose.

In essence, only six days out from surgery, no one could even tell I had it done (minus the slight swelling that remains.)  I’m sure by tomorrow morning the remaining puffiness around my eyes will be completely gone. 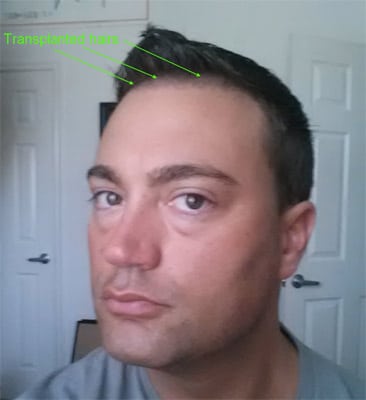 Today is Friday, May 17, eleven days after my surgery.  My wife very kindly removed my sutures yesterday.  I don’t feel the slightest bit of pain or discomfort at either the donor or recipient sites and all of the swelling around my eyes and nose was completely gone by day seven.

The transplanted hairs have begun shedding a bit.  This is normal.  When you wash your hair in the shower and then look at your hands you’ll see little, quarter-inch long pieces of hair.  It isn’t a large number of hairs – not hundreds like you just got a haircut – but a few here and there.  These are the transplanted hairs falling out, but they’ll regrow again in a few months because the transplanted follicles remain.  In the photo below you can see that many of the short, transplanted hairs still remain, which creates a darker look around my hairline, but the hairs are still very short.  After these all grow in, my hairline will have much better density.

I haven’t noticed an increase in normal-sized or “native” hairs falling out in the shower.  To me, this means I am not experiencing “shock loss” (or it hasn’t started yet), which is when your normal hair around the recipient areas falls out due to the trauma of the surgery.  Note: I use the term “trauma” in a technical sense.  After all, what we would normally consider extremely minor trauma is a big deal to something as small as a hair.  After my first procedure in 2008 I experienced a moderate amount of shock loss by day 11, but this time I don’t seem to be experiencing it much, if at all.

Overall, I feel completely back to normal.  I’ve been doing light cardio exercise at the gym and haven’t experienced any swelling or other issues, but I’m still going to wait a few more days before lifting weights to avoid stretching the scar in the donor area.